A Dram in the Woods – The Review

So its been a long while since I’ve been moved to write a review of a restaurant.  It literally has to be something a little special for me to dust off my foodie blogger credentials.  But lucky for me The Woods of Windsor delivered something last night right up my alley –  a 5 course whisky degustation.

Having recently dined at the Woods of Windsor with friends from Sydney down in Melbourne for a holiday I was already expecting something pretty awesome.  The meal we had then was excellent and paired with really attentive service it left my mates from Sydney wishing they had something similar up north.

Our evening started as we arrived at  the Woods at 7.15pm  and were greeted by the bartender with a special whisky concoction titled – A whisky in the garden of good and evil.    This drink is certainly something for a cold winter evening as there is a ball of butter in the base of the drink covered with spices.  You then pour a warm whisky mixture over the top melting the whole thing into a drink which tastes like a spicy,caramel flavoured like pick me up, kinda like the ultimate hot toddy.

We were pretty excited after we received this drink.  Its a pretty spectacular way to begin a night.  But then we were left waiting til around 8pm when we were finally seated at the table with all the other whisky lovers for the rest of the degustation.  This is a minor criticism and we only noticed the time ticking because we arrived hungry!  The Woods intends on running these events monthly and this is the one point they could improve on. 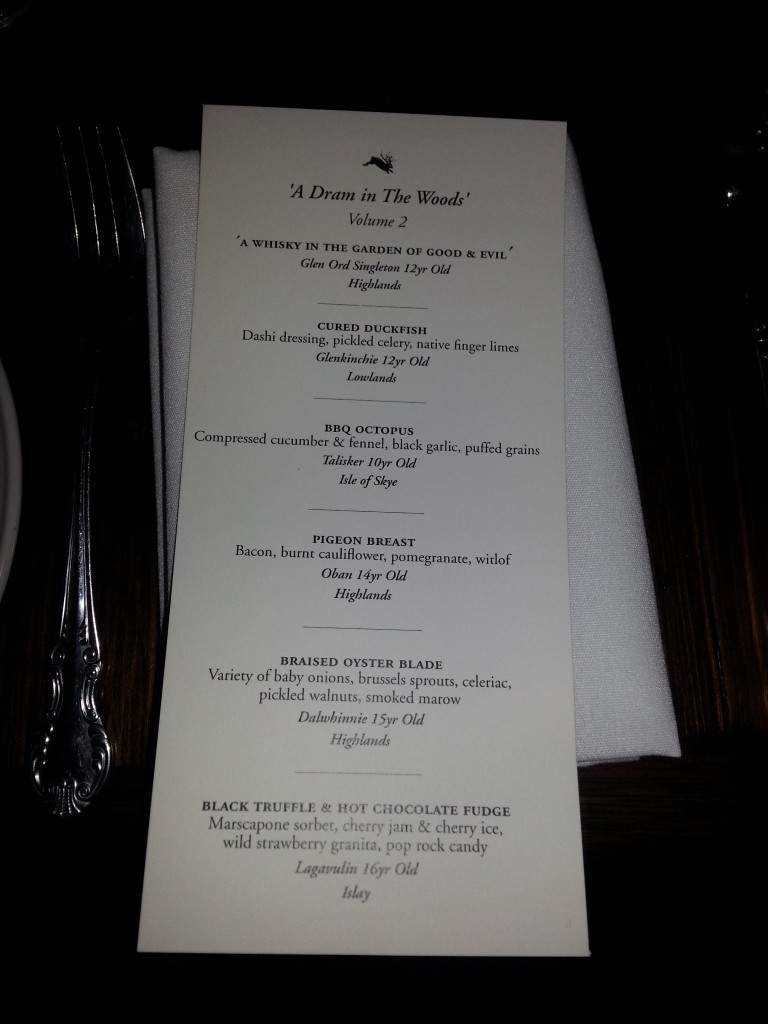 Arriving at the table we all found our allotted name tags for our seats excitedly read our menu.  Wow!  It was truly going to be an amazing evening.  We were then introduced to Shaun who was going to take us through the whisky pairings for the evening.  While we waited for the first course we were given some of the Woods home made bread with some truffle oil butter (Yum).  This certainly eased our hungry pangs – never have I seen bread eaten so quickly. Our table actually stole Shaun’s portion while he was chatting (sorry mate – you snooze, you lose!)

Shaun is clearly a wealth of knowledge when it comes to all things whisky.  He gave us a brief introduction to the Lowlands region in Scotland and explained why the 12 yr old Glenkinchie it was a perfect match for the first dish – Cured Duckfish with Dashi, pickled celery with native fingered limes. 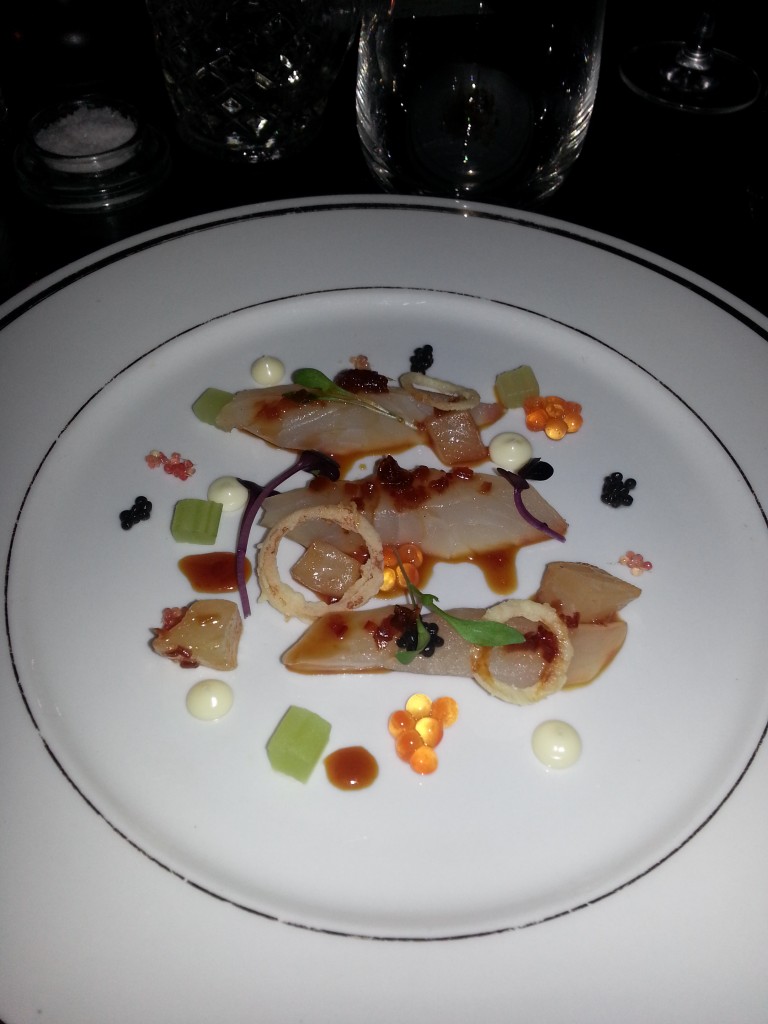 I’ve never had Duck fish but I have to agree it really suited the light, slightly grassy Glenkitchie whisky.

The next course was quickly introduced and Shaun recalled that he had actually had some fried Calamari at the Talisker distillery the last time he was there and at the time he had thought the whisky really suited Octopus.  The chef at Woods obviously agreed but went for something a little more posh with – BBQ Octopus, compressed cucumber and fennel, black garlic and puffed grains paired with a 10 yr old Talisker. 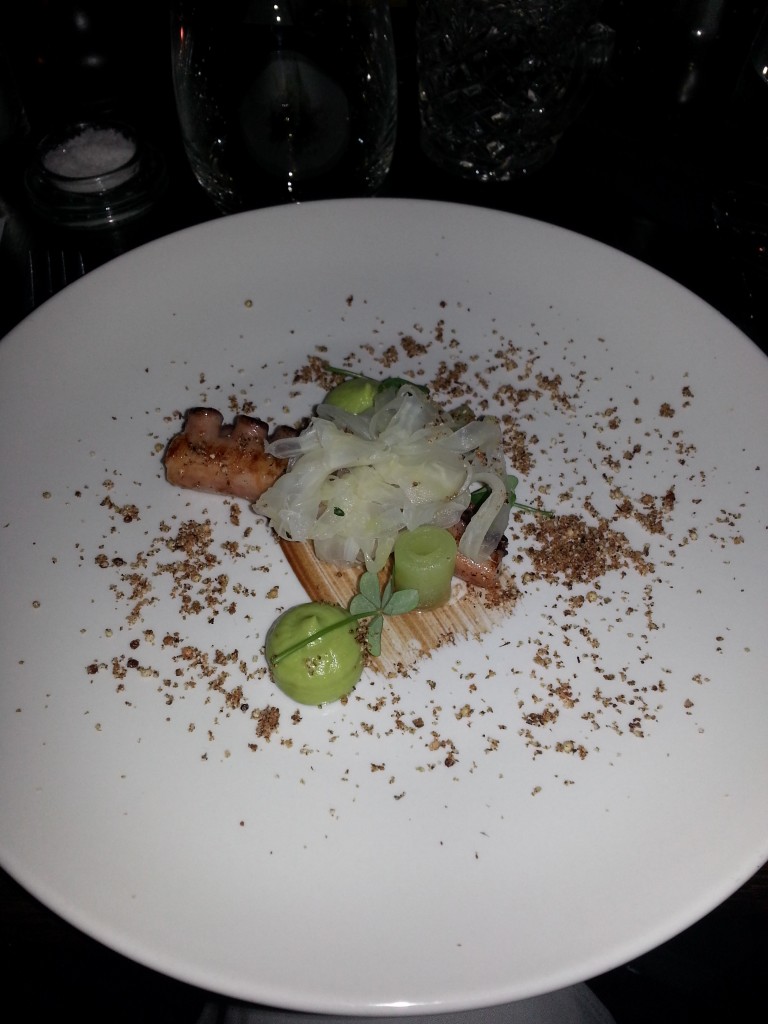 There were lovely textures in this dish and it did suit the peaty nature of the Talisker.  Since Talisker is produced on the Isle of Skye seafood is a natural pairing.  Octopus isn’t really my favourite but I gobbled this down fairly quickly.  Shaun produced some peat from Tasmania at this point and burned it slightly at the table so we could smell how the peat influenced the whisky.  A really nice touch. 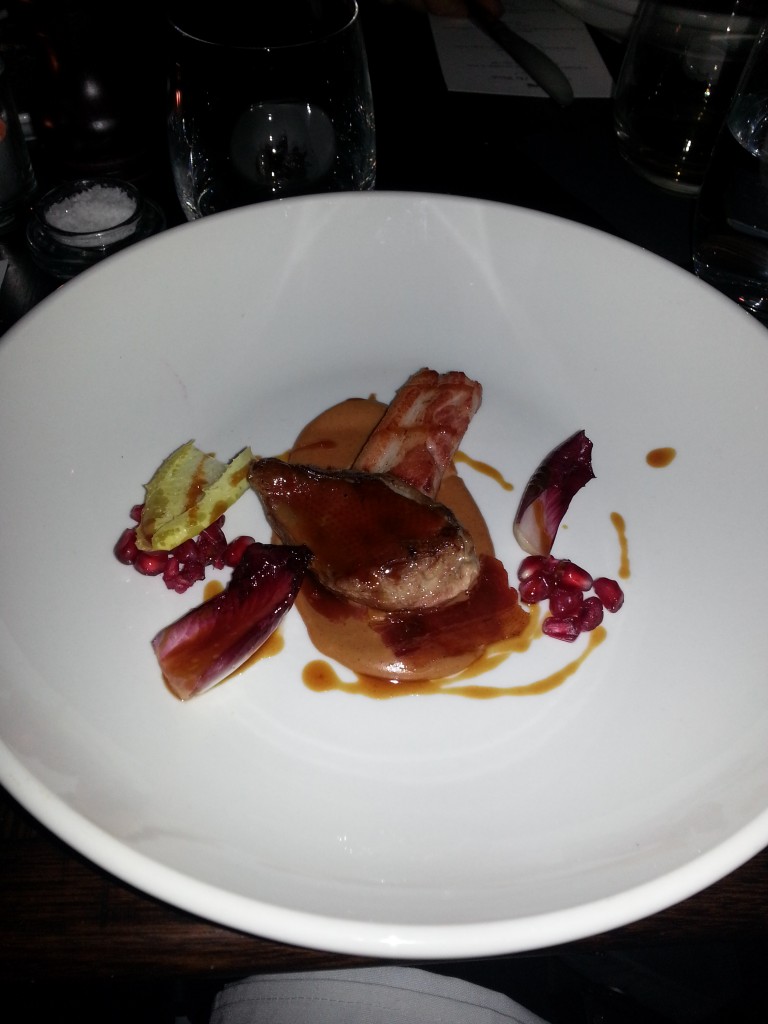 The rich, more matured 14 year old Oban really complimented the slightly gamey flavours of the pigeon.  Many people at our table hadn’t eaten pigeon before and the flocks hanging around the State Library might have to fear for their lives after this evening.  Who knew bird known as the “flying rat” could be so tasty.

There was a slight lull in the proceedings at this point when the owner of the Woods, Dean Bowden let us know there would be a 10 min wait until the next course – Braised Oyster Blade with a variety of baby onions, brussel sprouts, celeriac, pickled walnuts and smoked marrow paired with a 15 year old Dalwhinnie.  Shaun let us know that Dalwhinnie is actually the highest distillery in Scotland and is quite rightly classified as a highlands whisky.  The name Dalwhinnie is derived from Gaelic word Dail-coinneeamh, which means meeting place, referring to the meeting of ancient cattle drovers’ routes through the mountains.  All very interesting stuff and when you taste the whisky you do imagine the cattle drovers would have been quite happy to pick up a warming bottle as they drove their cattle to market. 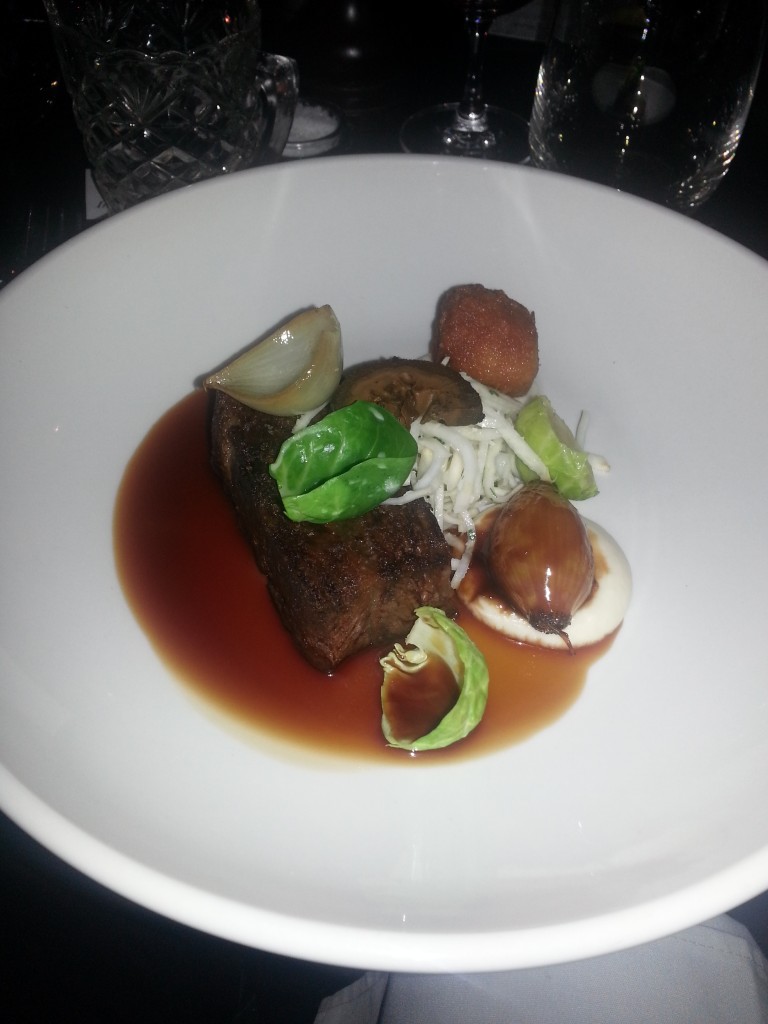 The food then arrived and what a meal it was.  The oyster blade was apparently braised for 12 hours at 85 degrees.  It certainly flaked apart and melted in your mouth.  But my favourite part of the meal had to be the smoked marrow.  This really worked well with the whisky and everyone at the table gave out many contented groans of delight.

Then it was dessert time and the owner of the Woods let us know that this was basically a deconstructed Black Forrest Cake.  The Black Truffle & Hot Chocolate Fudge with Marscapone sorbet, cherry jam & cherry ice, wild strawberry granita & pop rock candy was paired with my favourite whisky, the 16 year old Lagavulin. 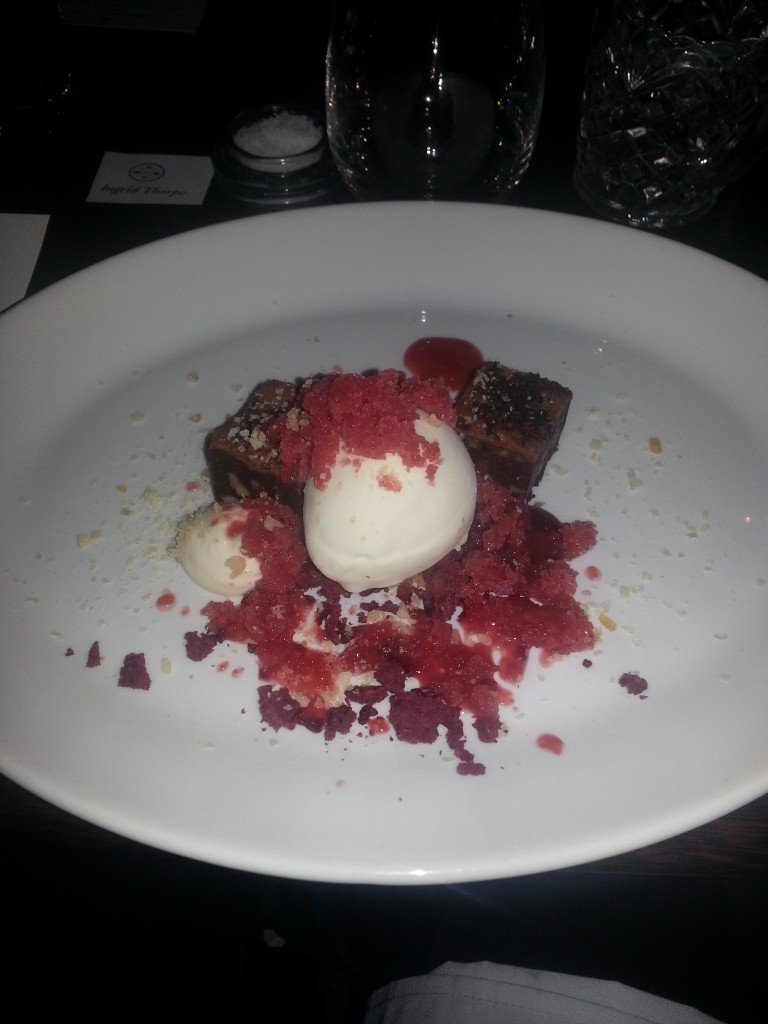 I must admit I did feel rather like a child when I had all this popping candy going off in my mouth.  It was a really fun way to end the night and for me any night that contains a 16 year old Lagavulin is a good night.  Some people think this is a pretty medicinal whisky but I love the peat, smoke and the woody aftertaste.  It balanced really well with the sweetness of the dessert.  It certainly was a celebration in your mouth.

In the middle of the dessert the young 26 year old chef Nick Stanton came out of his kitchen and the group gave him a deserving round of applause.  I clapped extra hard as he apparently worked under Gordon Ramsay in both London and Melbourne so the poor chap deserves props for surviving the no doubt torrents of abuse 😉

And that was it, our evening had come to a close.  We left the restaurant feeling quite naughty for being so decadent on a school night.  Well done Woods of Windsor, if this is the taste of things to come for future whisky degustations I will certainly return and bring friends. 🙂 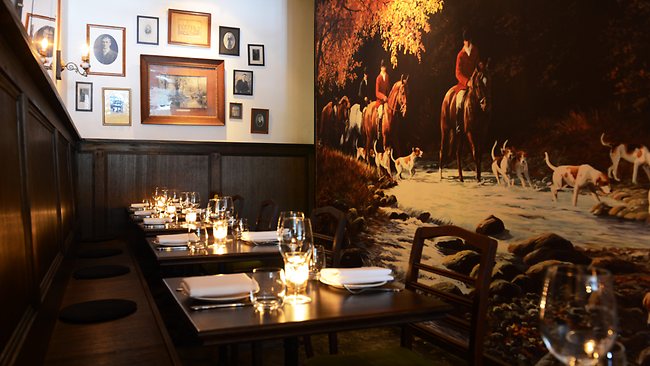